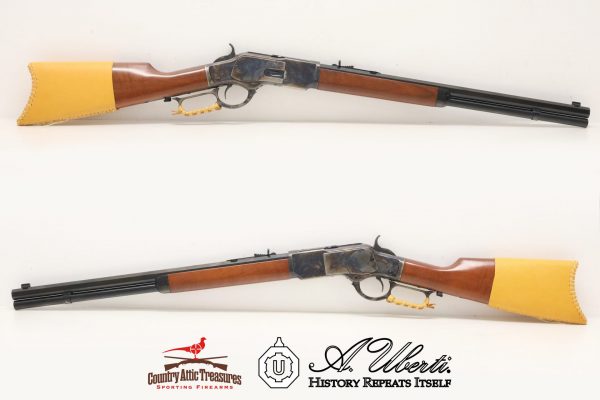 The 1866 was already quite popular when the smaller, yet quite similar 1873 model was released. It became an immediate favorite. The Winchester Repeating Arms Company may have thought that domestic military sales would make up most of the orders for the firearm, but in fact, civilian sales and international military purchases were what brought in profit that year.
In that day, the 1873 was the first lever action available with a broad variety of options. Today, an array of options is still offered in Taylor’s 1873 line.
This example is known as the Uberti/Taylors 1873 Comanchero, and is chambered in .357 Mag with 20″ barrels. It features a case colored receiver, lever and hammer, with a blued barrel. It also features special leather wrapping on the stock and the lever, which is what sets the Comanchero apart.
This rifle has just arrived, and is available for purchase!