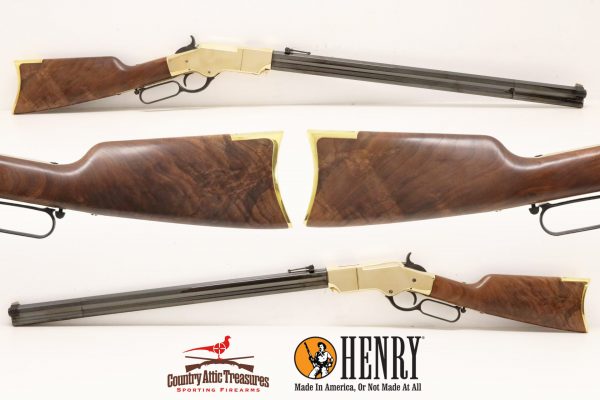 This Henry H011 is referred to as the “Original Henry” by Henry, and the Henry 1860 by most others.
The original 1860 was made in very small numbers, and adopted by the Union army, but most found their way out West after the end of the war.
With the originals fetching 6 figure prices at auction, they are virtually unobtainable, and led Henry to start this series of reproductions. The Henry Original is true to Henry’s 1860 patterns and patents, and virtually identical aside from concessions necessary to adapt to the .44-40 and .45 Colt centerfire rounds that replaced the long-obsolete rimfires. The H011 use a specially-formulated hardened brass receiver with the same tensile strength as steel and they are fitted with a one-piece octagonal barrel and magazine, fancy grade American Walnut stocks, a classic folding ladder rear sight and blade front, traditional half-cock safety hammer notch, and no modernized manual safeties.
This example is chambered in .44-40, and shows in tremendous condition. It is now in stock on consignment, and available for purchase!